Chlorine and Chlorine Dioxide and Other Chemical Oxidants

There are a variety of oxidants used in industrial water treatment including chemical, electrochemical, and ultraviolet radiation. Oxidants replace non-oxidizing biocides in nearly every application and are superior, especially, in terms of their environmental impact. The focus of this discussion is chlorine versus chlorine dioxide.

Chlorine dioxide is the preferred biological control method in:

Table #1 presents a summary of the chlorine v chlorine dioxide and other chemical oxidants plus ultraviolet radiation (UV). UV is finding an increasing role in the world of biological control products with a focus more on institutional and residential applications. 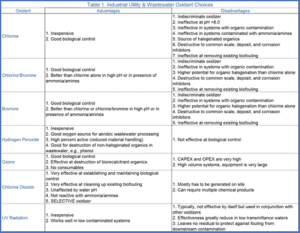 Explanation of Specifics from Table #1 – Chlorine versus Chlorine Dioxide

The following discussion focuses on industrial utility applications like open, recirculating cooling water systems. Wastewater applications, such as the destabilization of particulate or oil droplets, upstream of a flotation or other enhanced gravity separation technology, now, generally preclude the use of halogens due to the likelihood of the creation of carcinogenic, bio-recalcitrant organics. Interface disruption, or the destabilization of particulate or oil droplets, is preferably accomplished with chlorine dioxide or hydrogen peroxide. Use of the latter is discouraged in high chloride environments, such as seawater, due to the likelihood that chlorides will be oxidized which in turn will oxidize bromides which have a strong tendency to react with soluble organics.

Chlorine was introduced for controlling bacteriological contamination of potable water supplies in Germany and the United Kingdom, in the 1890s. The practice spread to the United States and eventually around the globe. Chlorine was commonly used in swimming pools, spas, in aqueous systems that involved human interaction or systems impaired by accumulations of biomass.

Chlorine is good at maintaining biological control in open, recirculating, cooling water and most other industrial applications with the exception of those with high sulfides or oxidizable organics. Given the general preclusion of chlorine gas, the most common, physical form of chlorine is bleach, nominally 12.5% active. Bleach is produced at 15+% active but degrades quickly so the industry norm, for calculation purposes, is 12.5% available chlorine.

Chlorine (as bleach) reacts with water as follows:

HOCl is the killing species which is present in water determined by a highly pH dependent equilibrium reaction below: 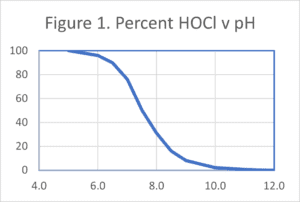 As the pH increases above 7.5 the right side of the equation, OCl–, dominates so the effectiveness of chlorine, determined by the HOCl concentration, is substantially impaired. Figure 1 shows that at pH ~8.0, only ~30% of the active species is available. Modern cooling water treatment, scale and corrosion control systems, rely more on alkalinity to control corrosion, with a boost from a specific carbon steel corrosion inhibitor; even phosphate programs are operated at pH ≥ 8.0.

Chlorine is consumed at an 8:1 ratio; 8 parts of chlorine are consumed in reaction with 1 part of ammonia. The resulting products, chloramines, are not as effective as biocides, but do serve well as biostats. In industrial systems the oxidant demand is generally such that chloramines are insufficient to maintain biological control.

Until, the Bhopal incident, chlorine gas was the preferred physical form of chlorine, as a 100% active product, that was easily shipped and stored in pressurized cylinders. The first real push back against chlorine gas was a result of sweeping behavioral changes driven by the December 1984 tragedy in Bhopal, Madhya Pradesh, India. Given the pattern of that horrific event, the phrase, “outside-the-fence” came into vogue – “What do we have on our industrial campus that can escape our fence line and inflict real harm on the neighboring populations?” There were many process compounds which required material alterations to operations and safety control systems. Ancillary, non-process critical, compounds identified as potential “outside-the-fence” catastrophe sources were led by chlorine gas. Anyone, who has worked around chlorine gas cylinders, quickly learned to approach the cylinders downwind due to frequent, small leaks, that produce a small green pool of volatile liquid in the cylinder, liner head. Chlorine gas presents a material “outside-the-fence” threat, as well as a threat to “inside-the-fence” personnel. Chlorine gas is easily replaced. By the early 1990s, chlorine gas had been nearly entirely replaced with alternative chemical oxidants; bleach was the dominant replacement product.

In potable water systems, the feed of halogens was firmly connected to the generation of carcinogenic compounds; Trihalomethane (THM). Halogenated organics were established as frequently biologically active compounds which were not, readily, biologically degradable. A second round of the elimination of halogens was driven by the need to eliminate ancillary, non-process, potential sources of halogenated organics. The days of chlorine, bromine, and combination products were closing.

Chlorine, as bleach, is the most common product used for industrial utility, biological control where organic contamination potential (a potential source for the generation of halogenated organics) is low. Bleach is inexpensive. While bleach is inexpensive per pound, the low percent active and the rapid deterioration of bleach can make managing the product difficult and expensive. Chlorine dioxide is an apt replacement of halogens in systems contaminated with ammonia/amines or organics, operating at elevated pH ≥8.0, systems particularly prone to biological fouling or for cleaning systems that are badly, biologically fouled. Industrial utility systems generally select from halogen-based programs, chlorine dioxide, or hydrogen peroxide in wastewater applications. The halogen programs are slowly being phased out as the environmental damage from the discharge of halogenated organics and the associated long-term liabilities (https://www3.epa.gov/hudson/faqs.htm ) are recognized and quantified.

Chlorine dioxide used in the treatment of water, is present as a dissolved gas. Due to the high reactivity, the gas is frequently generated at the point of use. There are numerous generation means, from PureLine’s patented electrolytic, single reagent generation, PureLine’s patented UV/chlorine dioxide technology, to two and three reagent, generation technologies such as bleach + hydrochloric acid + sodium chlorite. The generation method, for a specific application, is selected based on volume of product required (value of a percentage point of generation efficiency), availability of reagents, and the relative difficulty in managing consumables inventories and infrastructure.

Chlorine dioxide is so effective at removing existing biological fouling that care, in implementing a clean-up program, is required to ensure the chemical scale, deposit, and corrosion control products are at sufficient concentrations to handle the changes and that large chunks of biological debris are not introduced to the system water without control measures in-place like high blowdown, clean screens in cooling towers, etc.

Halogen-based products such as chlorine gas, bleach, calcium hypochlorite, bromochlorodimethylhydantoin, and others, are indiscriminate oxidizers and are the source of environmentally hazardous, bio-recalcitrant, halogenated organics. Chlorine dioxide is a highly selective oxidizer, meaning that while there maybe oxidizable organics present, chlorine dioxide will preferentially go after bacteriological contamination first. A well-documented, peculiar feature of chlorine dioxide is the aggressive removal of bioaccumulations, such as algae on cooling tower decks, as mentioned above. Halogen-based products will not remove accumulations of bacteria or algae. For example, chlorine will turn the surface of an algal matt brown (killing the surface algae) but the matt will remain in-place and rejuvenate very quickly when the chlorine residual is not present.

The list of oxidizers presented in Table #1 have advantages and disadvantages depending on the system conditions. From the a paper by Greg Simpson et al, Corrosion 93, “A Focus on Chlorine Dioxide: The ‘Ideal’ Biocide” relative costs are shown below:

PureLine is an expert in water and wastewater treatment products and services, utilizing PureLine’s industrial water treatment chemicals to help our customers meet their discharge, disposal, and regulatory goals.

With over 20 years of experience in the manufacture, generation, and application of chlorine dioxide solutions, PureLine specializes in designing and implementing chlorine dioxide treatment solutions utilizing our broad line of proven chlorine dioxide generators and chemical solutions to control and inhibit the growth of mold, mildew, and odor causing bacteria.