Chlorine Dioxide Use In the Food Industry

Chlorine Dioxide and Its Disinfecting Properties

Since the 1920s, chlorine dioxide has been known for its disinfecting properties. It was recognized as a chemo-sterilizing agent in 1984; and in 1988, it was registered with the US Environmental Protection Agency (US EPA) for use as a sterilant. The USDA has deemed chlorine dioxide as certified for organic use in crop production, as an algicide, disinfectant and sanitizer. In addition, no corrosion is observed when using materials such as stainless steel, Lexan, and various other plastics such as Delrin, Teflon, and ultra-high molecular weight polyethylene (UHMWPE). With appropriate delivery equipment and care, chlorine dioxide is an effective means of decontamination. A significant feature of chlorine dioxide is that it has a distinct odor much like a swimming pool, making even minor leaks self-alerting, well below the OSHA 8-hour human habitation safety limit of 0.1 parts-per-million.

Both gaseous and aqueous phase chlorine dioxide has been proven to be an effective sterilizing agent that has broad and high biocidal effectiveness. Both forms of chlorine dioxide have been reported to effectively inactivate bacteria, including pathogens, viruses, bacterial spores and algae.

Effective as a Biological Sterilant

Chlorine dioxide is classified as a sterilant. Sterilants are defined by their ability to destroy bacterial spores, thus confirming that all other microbial life present in the treatment area has been eliminated. Chlorine dioxide works by penetrating the cell wall of microorganisms and disrupting the pathogen’s metabolic functions, thus immediately and permanently eliminating the problem at its source. It is a powerful biocide at concentrations as low as 0.1 parts-per-million over a wide pH range, does not produce hazardous by-products, and is more effective than hydrogen peroxide, peracetic acid, quaternary ammonia and sodium hypochlorite (chlorine bleach). Studies from the FDA and EPA show that chlorine dioxide is effective in eliminating over 20 of the most common harmful pathogens, including Salmonella, Listeria, E Coli, Clostridia, B anthracis (anthrax), and several species of fungal molds and yeasts.

Chlorine dioxide is a real gas at room temperature. As a real gas, it expands to uniformly fill the space it is contained within, regardless of the effect of gravity. This gives it the natural ability to contact all surfaces within a space in equal concentrations, guaranteeing an even level of kill throughout the space. Its small molecular size coupled with this distributive ability allows the gas to penetrate even the smallest cracks and crevices in walls and floors and reach all surfaces of food processing equipment.

Unlike some other fumigants such as hydrogen peroxide which leaves a residue and is also a human carcinogen, chlorine dioxide gas does not leave a residue, is not a carcinogen.

Some chemical fumigants are applied using a dry fog and/or vapor decontamination method which leave a residue, necessitating a post-treatment cleaning, and often requiring an extended period of time prior to resuming plant operations to allow the chemical concentrations to dissipate and reach levels for human habitation. This residue is attributed to the nature of these products and their composition.

Chlorine dioxide does not leave a residue and does not require post-treatment cleaning. Processing plants can immediately be re-occupied and begin production once gas levels have reached the human habitation level of 0.1 parts-per-million, typically within 60 minutes of gas cessation.

A typical chlorine dioxide decontamination treatment exposure is often in the range of 1,000 – 1,500 ppm-hours (concentrations of ~200 ppm for five to eight hours). Pureline has performed rigorous testing of stainless-steel exposure to chlorine dioxide and has shown no signs of corrosion with concentrations as high as 900,000 ppm-hours (50,000 ppm for a period of 18 hours). The exception to any evidence of corrosion on stainless-steel would be due to poorly passivated welds, and/or other deposits resident on the stainless steel which may show signs of oxidation.

Sodium hypochlorite, paracetic acid and hydrogen peroxide are much more corrosive than chlorine dioxide. Other than unpainted mild steel, which may show signs of light oxidation, no other metals will be affected by chlorine dioxide.

All Chlorine Dioxide is NOT created equal

Chlorine dioxide gas cannot be compressed and therefore it is required that it be produced on-site at the point of use. There are several methods of producing chlorine dioxide. PureLine Solutions uses methods that create an effective 99.5% pure chlorine dioxide gas that DOES NOT require humidity controls and produces guaranteed sterilization results.

During chlorine dioxide gas treatment, the gas is exposed to varying environmental factors such as light and temperature, which influence gas efficiency.

In several studies, including research by Lee et al, the effect of UV-A and fluorescent light was observed. Both UV-A and fluorescent light will accelerate the degradation of chlorine dioxide gas, thus it is preferable, but not necessary to treat in a low-light or no-light environment. In the same study, the effect of temperature was observed, and it was found that chlorine gas efficiency is not affected in temperatures above 5 degrees Celsius (41 degrees Fahrenheit).

When mixed with water, chlorine bleach (sodium hypochlorite) forms hydrochloric acid. Hydrogen peroxide, by contrast, will dilute in water and cannot kill organisms within or beneath the water.

Biofilms form when bacteria adhere to surfaces in moist environments by excreting a slimy, glue-like substance. A biofilm community almost always consists of rich mixtures of many species of bacteria and other microorganisms. This biofilm matrix develops complex three-dimensional, resilient, attached microbial ‘communities’, increasing the difficulty of decontamination. In rigorous studies, PureLine has shown that treating a log-8 biofilm with chlorine dioxide will achieve sterilization within four hours. A log-8 biofilm is far in excess of what would be expected on a regularly cleaned surface or partially wetted surface in any environment.

NOT Explosive When Fumigating

There is no evidence that chlorine dioxide is a carcinogen. Chlorine dioxide can be found in toothpastes and mouthwashes. It is used to treat municipal drinking water supplies and to rinse various fruits, vegetables, and meats. Both the EPA and FDA have approved the use of chlorine dioxide for use in these instances.

Chlorine Dioxide versus Other Treatment Agents 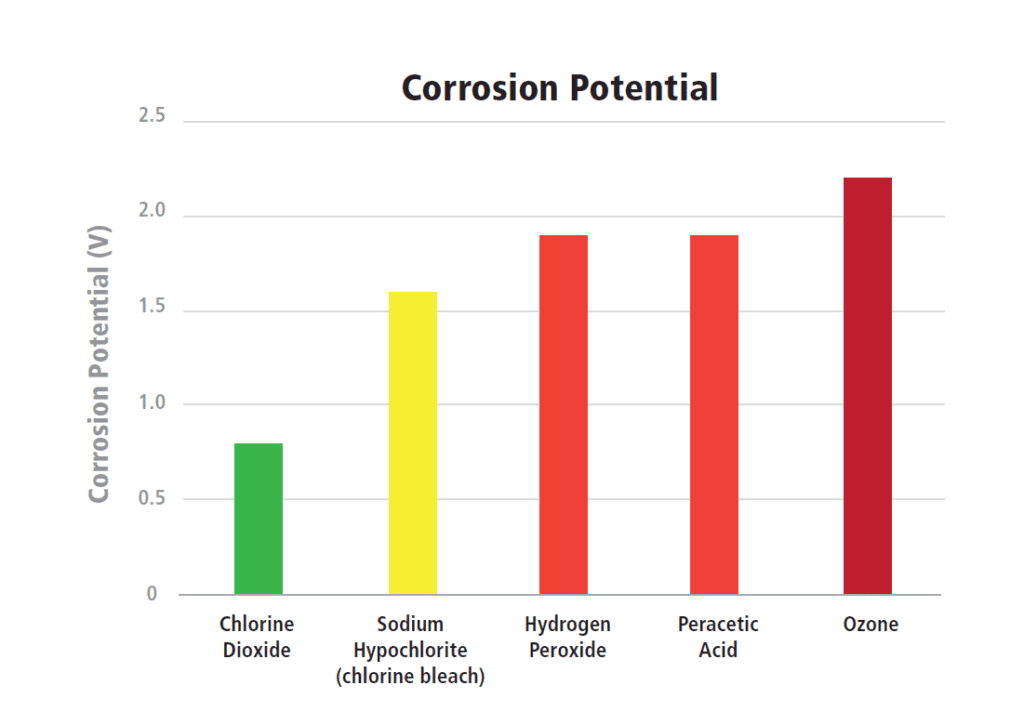 Chlorine dioxide has a 0.1 parts-per-million (ppm) OSHA 8-hour safety level for human exposure. Chlorine dioxide gas has an odor similar to a swimming pool and can be sensed (smelled) below the 0.1ppm threshold, acting as an alert in case of a leak, as personnel are aware of the leak at very low levels below the human habitation level, allowing them to act upon it as they deem fit (either aborting the process or fixing the leak). By contrast, hydrogen peroxide is odorless, and any leakage cannot be easily identified by nearby personnel, allowing for leakage and exposure to personnel to continue and worsen.

Another property which aids in the use of the chlorine dioxide process is its status as a real gas. Chlorine dioxide does not condense on surfaces; therefore, in case of emergency the gas can be aerated down to safe human habitation levels quickly. Hydrogen peroxide is a liquid at room temperature and therefore condenses on surfaces. This condensate takes much longer to dry and aerate from a space, needing hours if not overnight before it is safe for human habitation. This means that in the event of leakage, chlorine dioxide gas can be removed making the area safe for human habitation, while hydrogen peroxide may take until the next day.

Chlorine dioxide gas and chlorine dioxide aqueous solutions, when applied effectively, can be more effective in killing harmful bacteria, mold and spores and far less corrosive than many other fumigants. Due to its nature as a gas that does not condense on surfaces, a plant can be re-occupied, and operations can resume immediately upon aeration and reducing gas level to the 8-hour safety level of 0.1 ppm or less, often within no more than a few hours of cessation of gas production.

A significant added value in using PureLine is our capability to cost effectively deploy a chlorine dioxide decontamination engagement for areas ranging from small electric cabinets to entire plants up to several million cubic feet. Additionally, PureLine can train your operators in the deployment of PureVista™, our 99.5% pure chlorine dioxide product, for areas up to several thousand cubic feet, helping you cost-effectively manage your sanitation and decontamination needs.